CHARLOTTE, N.C. (August 2, 2018) – Contrary to popular belief, a recent report has revealed that today, August 2, is the most deadly day to drive on U.S. roads. According to the report, more motorists have been involved in fatal crashes on August 2 over the past five years than any other day of the year, beating out Independence Day and New Years. 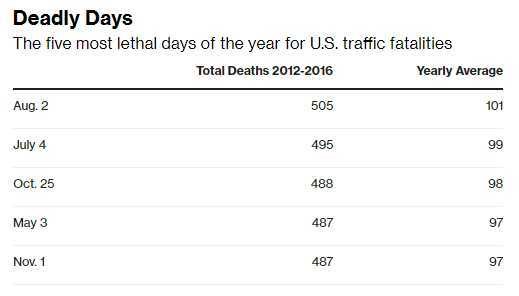 “This date might be shocking to many people, because it is not a holiday and there doesn’t appear to be anything special about it, but to us it makes sense,” said Tiffany Wright, AAA Carolinas Spokesperson. “The first week of August is still a big vacation time for many, teens are still out on summer break and families are taking advantage of warm temperatures with road trips. Drivers expect trouble like drunk driving or extra congestion on big holidays, but they aren’t always as vigilant on the regular days, like August 2.”

AAA Carolinas reminds motorists, no matter what day of the year, to always:
​

​AAA Carolinas, an affiliate of the American Automobile Association, is a not-for-profit organization that serves more than 2.1 million member and the public with travel, automobile and insurance services while being an advocate for the safety and security of all travelers.