“While the statewide average in South Carolina hasn’t hit below $2 yet, several gas stations throughout the state are already below that mark,” said Tiffany Wright, AAA Carolinas spokesperson. “Cheap crude oil prices are driving the fuel savings at the pump, as last week crude dropped to its lowest point of the year. However, this week’s Organization of Petroleum Exporting Countries meeting could cause crude prices to jump if the organization decides to reduce crude production.”

OPEC is expected to make an announcement on crude production at its December 6 meeting in Vienna, Austria. The scheduled meeting has not had a negative impact on pump prices so far.

​Below is a breakdown of prices across the region: 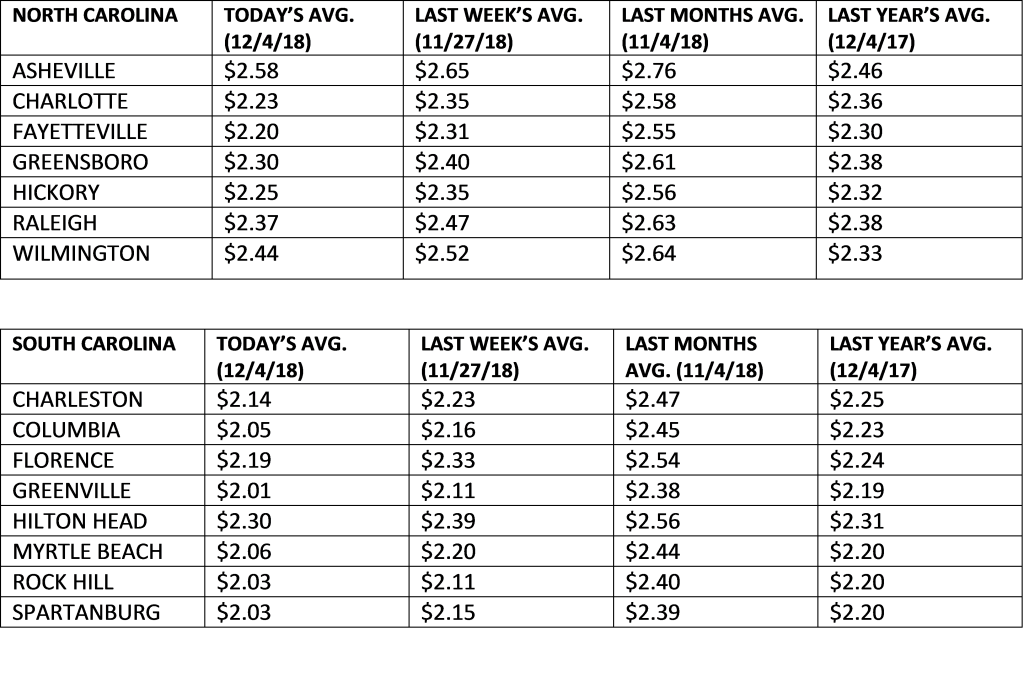 The national average gas price drops to $2.46 and sets a new low price for the year and is cheaper than a year ago by two cents. The last time the daily national gas price average was cheaper year-over-year was 18 months ago on July 6, 2017 when gas prices were $2.24.

​Motorists can find current gas prices along their route with the free AAA Mobile app for iPhone, iPad and Android. The app can also be used to map a route, find discounts, book a hotel and access AAA roadside assistance. Learn more at  AAA.com/mobile     .

AAA Carolinas, an affiliate of the American Automobile Association, is a not-for-profit organization that serves more than 2.1 million member and the public with travel, automobile and insurance services while being an advocate for the safety and security of all travelers.
​
For up-to-date information, follow our      Instagram      and    Twitter      accounts. For more seasonal traffic safety information,     sign up    to receive our monthly traffic safety newsletter. Each month includes five timely articles dedicated to keeping Carolinians safe and informed on the roads.​​