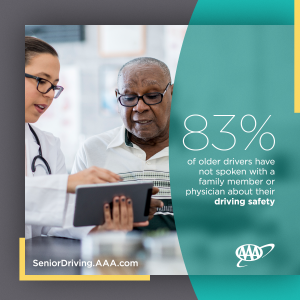 CHARLOTTE, N.C. (Aug. 14, 2018) –Nearly 83 percent of older drivers report never speaking to a family member or physician about their safe driving ability, according to new research from the AAA Foundation for Traffic Safety. Of the small percentage of families who do have the often difficult conversation, 15 percent do so after a crash or traffic infraction has occurred- which could be too late. Due to their fragility, older drivers are at greater risk of death and injury if involved in a crash.

In 2016, more than 200,000 drivers ages 65 and older were injured in a traffic crash and more than 3,500 were killed. With seniors outliving their ability to drive safely by an average of seven to 10 years, families should not wait to talk about safety. AAA urges seniors to begin planning for “driving retirement” at the same time they begin planning for retirement from work.

“There’s no perfect age to determine when it’s time to stop driving,” said Tiffany Wright, AAA Carolinas Foundation for Traffic Safety President. “Understandably, many older drivers can be hesitant to initiate these difficult conversations about their driving ability, so it is important that families are proactive in starting these discussions – because with proper planning, elderly drivers might be able to safely stay behind the wheel longer.”

The report is the latest research released in the AAA Foundation for Traffic Safety’s Longitudinal Research on Aging Drivers (LongROAD) project. Researchers found that only 17 percent of older drivers report ever speaking with a family member or physician about driving safety. The most commonly cited reasons for having the discussion include:

AAA recommends that families start talking with older adults about safe driving early and avoid waiting until there are “red flags” like crashes, scrapes on the car (from bumping into garages, signs, etc.), new medical diagnoses, or worsening health conditions. It is helpful to begin discussions when an older driver starts planning for other life changes, like retirement from work or moving to a new home. When talking to an older driver, families should:

o   Start early and talk often: Be positive, be supportive and focus on ways to help keep them safe when behind the wheel, including other forms of transportation available to older drivers.
o   Avoid generalizations: Do not jump to conclusions about an older driver’s skills or abilities.
o   Speak one-on-one: Keep the discussion between you and the older driver. Inviting the whole family to the conversation can create feelings of alienation or anger.
o   Focus on the facts: Stick to information you know, like a medical condition or medication regimen that might make driving unsafe. Do not accuse an older driver of being unsafe or assume that driving should be stopped altogether.
o   Plan Together: Allow the older driver to play an active role in developing the plan for their driving retirement.

“It’s best to start discussions with a loved one about other ways of staying mobile without driving before problems arise,” Wright added. “The sooner you start talking, the better the chance you will have in preventing injuries behind the wheel and hopefully help prevent the emotional stress that comes from taking the keys away. Permanently giving up the keys can have severe consequences for the health and mental well-being of older adults, especially if it’s done without prior discussions.”
​
It is important that families have a plan to help keep the older driver on the road for as long as safely possible. Past research from the AAA Foundation for Traffic Safety found that older adults who have stopped driving are almost two times more likely to suffer from depression and nearly five times as likely to enter a long-term care facility as those who remain behind the wheel. Families can use the AAA Driver Planning Agreement as a guide to starting conversations about safety. The agreement allows families to plan together for future changes in driving abilities before they become a concern.

For more information on AAA resources for older drivers, such as RoadWise online/classroom courses or other programs that help seniors better “fit” with their vehicles, visit www.SeniorDriving.AAA.com.