Heading into 2019, gasoline demand is expected to dwindle during the month of January, an expected change following the busy holiday travel season. At the same time, OPEC (Organization of the Petroleum Exporting Countries) will begin production cuts on January 1, with hopes that the shift in global supply will push oil prices higher. The effectiveness of the cuts will likely not be known until later in the first quarter.

“All eyes are on OPEC to kick off the year,” said Tiffany Wright, AAA Carolinas spokesperson. “Many are waiting to see if they stick to their promise to cut crude production by 1.2-million b/d and if the proposed cuts will be enough to restore balance to the market. Cutting production would likely raise prices as supply decreases.”

Over the past few years, OPEC and partnering countries have demonstrated a strong resolve to comply with proposed cuts in production. It is likely that the cartel will reconvene in April, and if there is a need to further balance global supply and demand, OPEC will likely tweak current production numbers at that meeting.

AAA members can now save five-cents/gallon every fill-up, every day at Shell gas stations. Members simply register with their AAA card and will then receive the discount at every fill-up.

Below are prices by region: 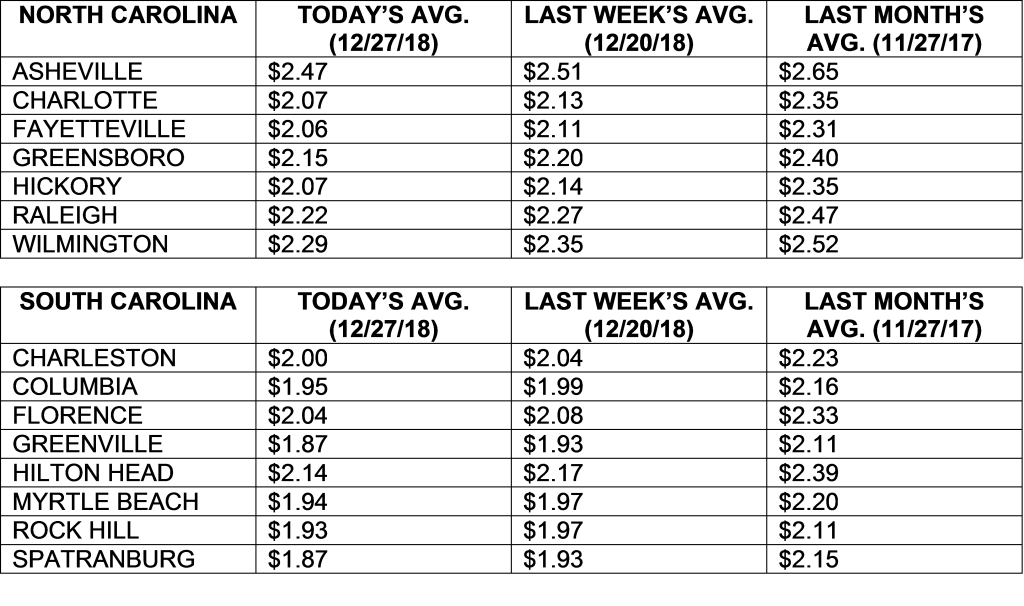 Motorists can find current gas prices along their route with the free AAA Mobile app for iPhone, iPad and Android. The app can also be used to map a route, find discounts, book a hotel and access AAA roadside assistance. Learn more at  AAA.com/mobile     .

AAA Carolinas, an affiliate of the American Automobile Association, is a not-for-profit organization that serves more than 2.1 million member and the public with travel, automobile and insurance services while being an advocate for the safety and security of all travelers.
​
For up-to-date information, follow our      Instagram      and    Twitter      accounts. For more seasonal traffic safety information,     sign up    to receive our monthly traffic safety newsletter. Each month includes five timely articles dedicated to keeping Carolinians safe and informed on the roads.​​​